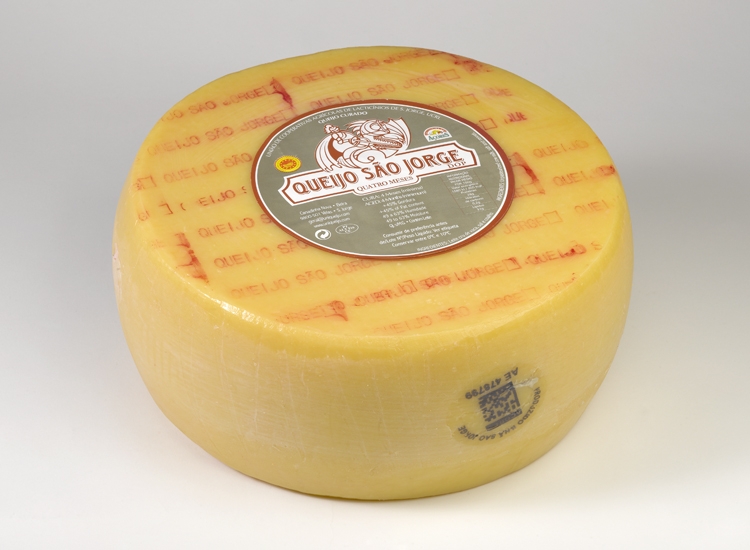 The climate and soil of Azores archipelago is excellent for pastures in most of its volcanic islands. Some of them have more cows than people. These are created outdoor, yielding milk of high quality, reflecting the quality of the cheese. The origins of São Jorge cheese, produced in the island with the same name, back to the sixteenth century and still maintains the traditional methods and traditional ingredients that characterize their manufacture, today is considered to be the most reputed cheese in the Azores due to is greatly appreciated for the spicy flavor that it acquires over time, making it a most tasty snack. This large unpasteurized cow's milk cheese, consisting of a hard or semi-hard paste, comes in large format cylinders, weighing between 10 and 11 kilos, and with a powerful aroma, the cheese of São Jorge is a delight for all of its many appreciators. It is cured for a minimum period of 90 days, but it’s also commercially available aged for 4 and 7 months in rooms that are kept at a constant temperature and its manufacturing process still follows the traditional artisanal methods and the same initial formula. It is a ripened semi-hard to hard cheese, with a consistent yellowish crust, smooth and shapely, with small eyes, with a yellow paraffin coating. Sao Jorge has a strong, clean aroma and a slightly spicy taste (3 months), becoming full flavoured with some lightly peppery (4 months). When aged for more than 7 months it becomes crumbly and granular like parmesan and with a clean piquant notes.